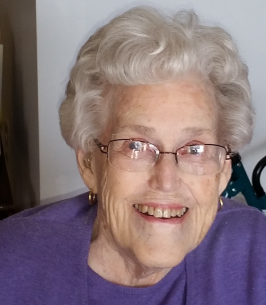 Elizabeth Lane passed away peacefully on July 8, 2022. She was born in Burlington, VT on June 18, 1921, and was the daughter of the late Floyd B and Lucile Major Jenks. A graduate of the University of Vermont, Betty taught for schools in Derby and Burlington, VT before moving to Western New York. She earned a Masters Degree in Library Science from SUNY Geneseo and became the first female faculty member of Genesee Community College where she became the Associate Dean of the Learning Resource Center. After her retirement she established the college archives which includes much of the history of GCC.

Betty was a member of Zonta, Pi Beta Phi and Delta Kappa Gamma. She traveled extensively with her husband Bill and was a talented seamstress, knitter and an avid reader.
Betty was predeceased by her husband of 64 years William T. Lane, five brothers and one sister, and her daughter in law, Gretchen Lane. She is survived by her five children, the Rt Reverend Stephen T. Lane of Rochester, NY; Mary Beth (Jeffrey) Parker of Rush, NY; Timothy (Kirsten) Lane of Tasmania; Christopher (Brenda) Lane of Arnold, MD and Rebecca (Craig) Wagner of Chili, NY along with her grandchildren Dana (Fabrice) Veron, Emily (Jason) Ross, Jeremy (Mia Breitkopf) Lane, Kathryn (Stevie Rushing) Parker, Stephen (Rachel) Parker, Joshua Lane, Samuel (Kristin) Lane, Carly (Spencer) Lane-Perry, Alyson (Noa) Halalilo, Erin (Michael) O’Brien, and 15 great grandchildren and several nieces and nephews.
Many thanks to the care teams at Elderwood of Lakeside at Brockport, as well as her long-time aide Stacey Fussell.

All rights reserved. This obituary is also archived at obittree.com