In Memory of
Esther C.
Cable (Clark)
1922 - 2018
Click above to light a memorial candle.
Memorial Candle Tribute From
Cameron Funeral Homes, LLC
"We are honored to provide this Book of Memories to the family."
View full message >>>
Send Flowers
Menu

In the event that there is an error
in the information presented,
please contact the funeral
home by clicking here. 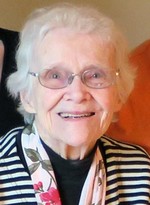 Rochester
Esther Cable died September 1 at age 95 at St John’s Home after a brief illness. Born in Philadelphia Pa, daughter of Sam and Anne Clark, she married (Sydney) Roy Cable of Rochester in 1944. They celebrated 65 years of marriage before his death in 2010. Trained as a social worker, she supported her family while Roy completed his medical training and established a Family Practice on Ridge Road West in Greece. For the last 20 years she lived at St. John’s Meadows.
Esther is pre-deceased by her parents, her husband Roy, and her daughter Susan Cable (Don Tubman) of Scottsville. She is survived by sisters Betty Hough (Bud) and Edith Kendus of Norristown Pa; sister-in-law Lorrie Spaulding (Rusty) of Tully NY; three sons, Ritchard (Annette) of West Hartford CT, David (Pat) of Georgetown TX, and Robert (Betsy) of Pawtucket RI; grandchildren; Matthew, Sara, Amy, Jonathan, Anna, Adam, Stephanie, Seth, Dylan, and Jacob; and great- grandchildren; Emily, Ben, Margaret, and Tammah.
Esther volunteered for many organizations, including the YWCA, JPC, and her Baptist Church. Ahead of her time, she supported many progressive causes, including a comprehensive sex education program at church in the 1960’s.
Funeral arrangements are private. The family requests that donations be made in Esther’s memory to First Baptist Church of Rochester, 175 Allen's Creek Road, Rochester, NY 14618, or St. John's Foundation, 150 Highland Drive, Rochester, NY 14620, www.stjohnsliving.